Bergeson & Campbell, P.C. (B&C®) is pleased to announce the release of the complete suite of TSCA Tutor™ regulatory training courses online and on-demand at www.TSCAtutor.com.  Professionals seeking expert, efficient, essential training can preview and enroll in on-demand classes to complete at their own pace and timing.  In addition to the newly released online e-learning courses, B&C’s TSCA Tutor™ training platform offers live in-person training at a company’s site and customized live webinar training, so companies can mix and match training modules and training approaches to provide the most suitable combination for their work needs.

Toxic Substances Control Act (TSCA) awareness is a critically important element in the 21st century work environment for any business that involves industrial chemicals.  The new normal requires awareness of TSCA’s application to a company’s operations to ensure consistent compliance with TSCA regulations and, importantly, to understand and anticipate how the U.S. Environmental Protection Agency’s (EPA) ongoing implementation of new TSCA will impact a company’s industrial chemical selection and use processes. 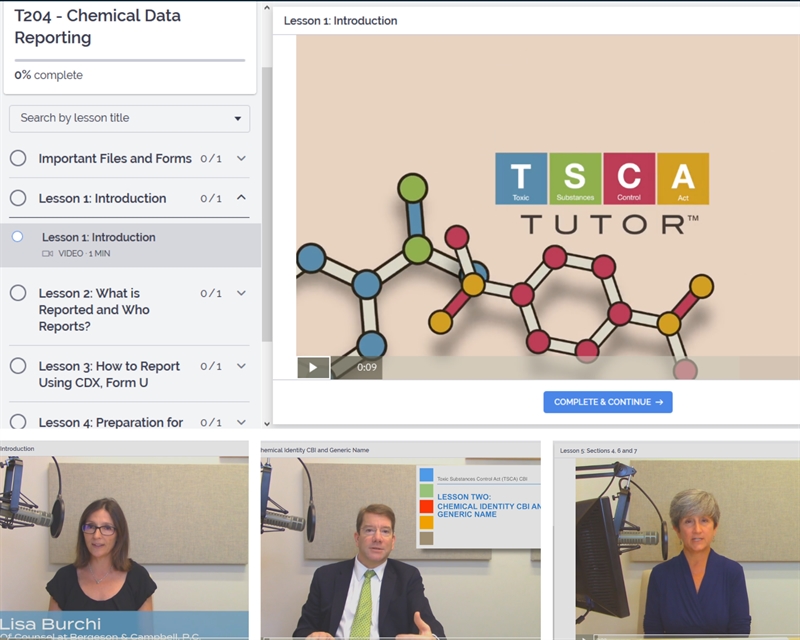 The courses were developed and are presented by members of B&C’s renowned TSCA practice group, which includes five former senior EPA officials; an extensive scientific staff, including seven Ph.D.s; and a robust and highly experienced team of lawyers and non-lawyer professionals extremely well versed in all aspects of TSCA law, regulation, policy, compliance, and litigation.

Online courses are offered at $100 for one-hour modules and $200 for 2-hour modules, or $1,400 for the full 12-module training.  Courses can be completed at the learner’s own pace, and enrollment is valid for one full year.  Interested professionals should visit www.TSCAtutor.com to view sample course segments and purchase modules.  Volume discounts are available for companies wishing to purchase courses for multiple employees.  Companies interested in live in-person or customized live webinar training should contact .(JavaScript must be enabled to view this email address) to schedule.

For more information about TSCA Tutor™, contact Heidi Lewis at .(JavaScript must be enabled to view this email address), or read our full course descriptions here.
TSCA Tutor -- Curriculum

By Lynn L. Bergeson and Emily A. Scherer
As reported in our June 28, 2019, memorandum, on June 24, 2019, Bergeson & Campbell, P.C.(B&C®), the Environmental Law Institute (ELI), and the George Washington University Milken Institute School of Public Health (GWU) presented “TSCA: Three Years Later,” a day-long conference with leading experts exploring the current impacts of the Toxic Substances Control Act (TSCA) on science policies, challenges faced by industry, and the impacts of TSCA on regulatory policies, especially those concerning ensuring compliance and enforcement. A recording of the full conference is available online.  Our memorandum provides details regarding the session topics and presenters, including copies of the presentation where available.

On April 14, 2017, Lynn L. Bergeson’s article “TSCA Reform: Key Provisions and Implications,” was published in Volume 26, Issue 2, of Environmental Quality Management.  On June 22, 2016, President Obama signed into law the Frank R. Lautenberg Chemical Safety for the 21st Century Act which substantially amended the Toxic Substances Control Act (TSCA), and, in so doing, fundamentally altered the domestic management of industrial chemicals -- the lifeblood of many manufacturing processes.  This article summarizes key changes to TSCA and explains their likely impacts on the manufacturing sector.


The New TSCA -- Webinar 4: Administration of the Act, Preemption, Fees, and Green Chemistry
Posted on October 11, 2016 by tscaadm

Ms. Burchi, Of Counsel at B&C, discussed “Preemption” under Section 18 of new TSCA. Ms. Burchi described preemption as “one of the most debated subjects in [the TSCA reform] debate” and stated that she had heard it referred to as a “linchpin” in terms of reaching agreement on provisions for TSCA reform to occur.  Ms. Burchi stated “Everything in the new Section 18 is new or very significantly changed from what we were used to with regard to preemption … The final provisions are fairly complicated … It will remain to be seen whether states continue to act with regard to chemical substances in the way that they have been.”

Ms. Burchi addressed the three “main” provisions related to preemption under new TSCA Sections 18(a)(1)(A)-(C), and analyzed more specific issues (e.g., pause preemption) and the related exceptions.  Ms. Burchi described the TSCA Section 18(d)-(e) provisions relating to “Exceptions” and “Preservation of Certain Laws.”  Ms. Burchi also addressed new TSCA’s Section 18(f) “Waivers” provisions and concluded her segment of the presentation with the following statement:  “It remains to be seen whether states are going to be jumping in to [take action] when EPA has already identified a chemical for prioritization and review … [There will be some interesting provisions and interplay] to be seen as we move forward under new TSCA.”

Ms. Dolan, Senior Regulatory Consultant at B&C, analyzed “Fees” under new TSCA and addressed EPA’s obligations to:  (1) set lower fees for small business concerns; (2) consider balance between manufacturers and processors; and (3) consult with the regulated community.  Ms. Dolan stated “new TSCA directs EPA to review its fee program on a three-year cycle and revise it as needed to raise the target fees … While new TSCA did not set a deadline for developing the fees program, it really didn’t have to -- EPA, of course, has every incentive to knock this rulemaking out quickly.”

Ms. Dolan indicated that a final rule is expected on fees under new TSCA by June 2017, and provided an overview of comments received on the proposed rule.  Ms. Dolan stated that “overarching themes” in the comments included that:  (1) fees should be tied to the level of required effort; (2) fees should encourage innovation; and (3) fees should not be overly complex or difficult to administer.  In relation to (3), Ms. Dolan quoted a commenter that stated “don’t give us the [Internal Revenue Service (IRS)] Code.”

Ms. Dolan stated “everyone seems to want to know how much will a [pre-manufacture notice (PMN)] cost in the future … I think the answer to that [will come with a big red bow] in December.  Specifically, EPA states that it will send a proposal to [the Office of Management and Budget (OMB)] in mid-October … EPA may well set a comment period of at least 60 days for this proposed rule.”

Dr. Engler, Senior Chemist at B&C, discussed Sustainable Chemistry (i.e., Green Chemistry) under new TSCA.  Dr. Engler stated “new TSCA is largely silent on sustainability” and indicated that the “primary benefit” to Sustainable Chemistry under new TSCA is the abbreviated review period when EPA determines that a new chemical is “not likely to present” an unreasonable risk (i.e., 90-day period waived and manufacturers can commence manufacturing immediately).  Dr. Engler addressed chemicals that EPA considers to present low hazard for health and ecotoxicity (“low/low” chemicals) and stated that new TSCA could be “more of a driver for Sustainable Chemistry,” if only low/low chemicals escape regulation.

Dr. Engler addressed “Relative Risk under New TSCA” and EPA’s “Safer Choice Program” (SCP).  Dr. Engler discussed the Senate Report on S. 697, which suggested that EPA should consider “private sector voluntary consensus standards as an alternative” to SCP.  Dr. Engler indicated that as the relevant section of the Senate report concerns Section 23, the Sustainable Chemistry Section that was not included in the enacted new TSCA, it is unclear how it applies to new TSCA as enacted.  Dr. Engler stated that EPA is proceeding with SCP and hosting a summit in November on this topic.

The webinar concluded with a Questions and Discussion (Q&D) session, and B&C’s expert panel provided useful answers and analyses in response to attendees’ questions.  Ms. Bergeson moderated the Q&D session, which was organized by topic.

In the Q&D session, Ms. Bergeson stated and asked Ms. Dolan: “Fees are super important … [small businesses and startups] might have a hard time mustering any type of financial liquidity to get their notifications through the gauntlet of EPA -- so how would you expect EPA to be defining lower fees for purposes of small business provision?”

Ms. Dolan responded by stating “[currently, the ratio is $2,500 and $100 for small businesses.  I would imagine there will be some kind of comparable proportionality and currently there are other submissions (e.g., Low Volume Exemptions) that don’t require any fees.  EPA has got to raise the money somewhere -- the more they put it on something else or the more they try to avoid charging fees for things, the more it’s going to jack up the cost and other things.  I would imagine that they are going to charge something for everything.  Whether they maintain that proportionality of 100:2500 remains to be seen.  Another consideration is what constitutes a small business.  There is a lot of conversation about that and the fact that definition hasn’t been updated in quite a while … This might be something that is the focus of a lot of attention in the proposed rule.]”

Ms. Bergeson drew on Mr. Auer’s extensive experience with EPA on several occasions during the Q&D session, starting questions with “If you were back at EPA,” and Mr. Auer’s responses were comprehensive.   Dr. Engler responded to questions regarding Green Chemistry and discussed Persistent, Bioaccumulative, and Toxic (PBT) substances under new TSCA, and Ms. Burchi answered questions on California’s Safer Consumer Products Regulation (SCPR) and preemption under new TSCA.

More information on TSCA reform and B&C’s “The New TSCA: What You Need to Know” webinar series is available online.